In this tutorial, we’ll be building a React Calculator app. You’ll learn how to make a wireframe, design a layout, create components, update states, and format the output.
To get you inspired, here’s a link to the deployed project we’ll be building.
Also, here’s the source code, just for reference if you need help in any stage of the project.
Since we’ll be building a Calculator app, let’s pick a scope that’s not too complicated for learning but also not too basic for covering different aspects of creating an app.
The features we’ll implement include:
To start off, we’ll draw a basic wireframe to display our ideas. For this, you can use free tools like Figma or Diagrams.net. 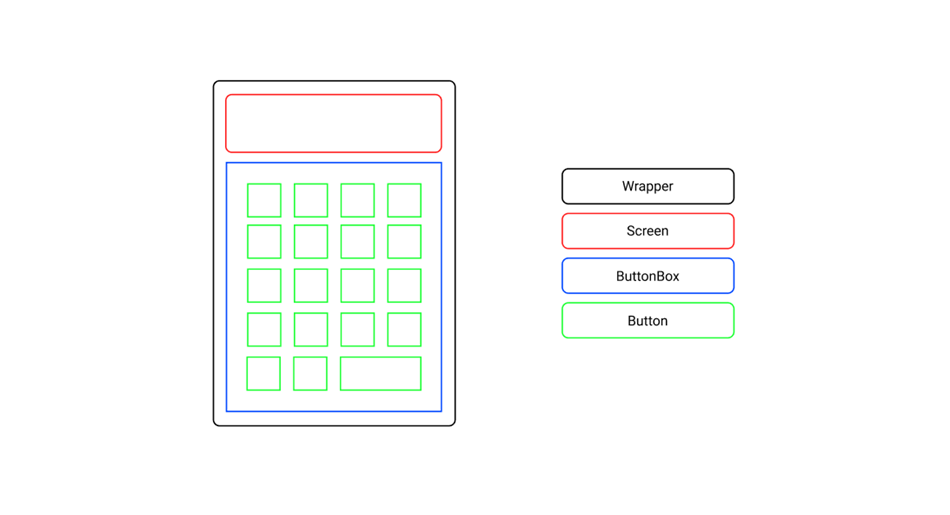 Note that, in this phase, it’s not that important to think about colors and styling. What matter most is that you can structure the layout and identify the components involved.
Once we’ve dealt with the layout and the components, all that will be left to do to complete the design is to pick a nice color scheme.
Below are some guidelines for making the app look great:
Based on the criteria above, we’ll use the color scheme shown below.

To start, open the terminal in your projects folder and create a boilerplate template using the create-react-app. To do that, run the command:
That’s the fastest and easiest way to set up a fully working React app with zero config. All you need to do after that is run cd calculator to switch to the newly created project folder and npm start to start your app in the browser. 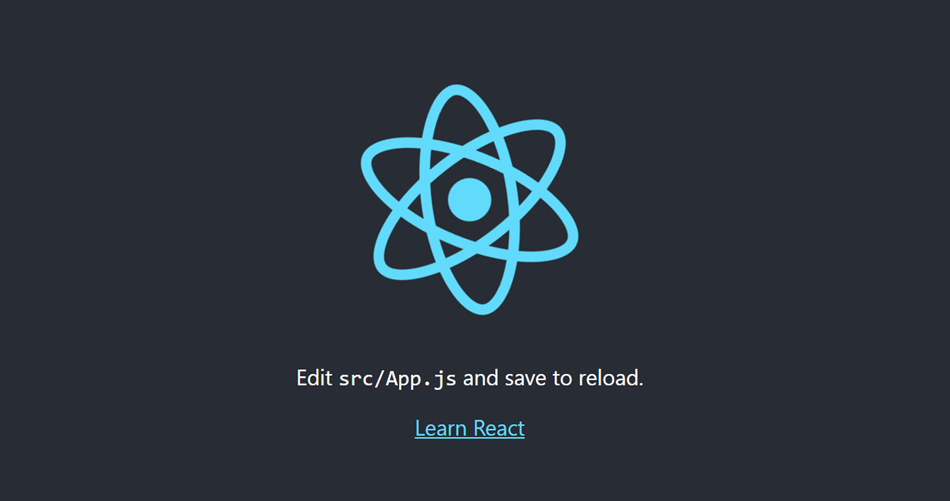 As you can see, it comes with some default boilerplate, so next we’ll do some cleaning up in the project folder tree.
Find the src folder, where the logic of your app will live, and remove everything except App.js to create your app, index.css to style your app, and index.js to render your app in the DOM.

Since we’ve already done some wireframing, we already know the main building blocks of the application. Those are Wrapper, Screen, ButtonBox, and Button.
First create a components folder inside the src folder. We’ll then create a separate .js file and .css file for each component.
If you don’t want to create those folders and files manually, you can use the following one-liner to get things set up quickly:
The Wrapper component will be the frame, holding all the children components in place. It will also allow us to center the whole app afterward.
The Screen component will be the top section child of the Wrapper component, and its purpose will be to display the calculated values.
In the features list, we included display output resize on length, meaning longer values must shrink in size. We’ll use a small (3.4kb gzip) library called react-textfit for that.
To install it, run npm i react-textfit and then import and use it like shown below.
The ButtonBox component, similarly to the Wrapper component, will be the frame for the children — only this time for the Button components.
The Button component will provide the interactivity for the app. Each component will have the value and onClick props.
In the stylesheet, we’ll also include the styles for the equal button. We’ll use Button props to access the class later on.
The base file for rendering in React apps is index.js. Before we go further, make sure your index.js looks as follows:
Also, let’s check index.css and make sure we reset the default values for padding and margin, pick some great font (like Montserrat in this case) and set the proper rules to center the app in the viewport:
Finally, let’s open the main file App.js, and import all the components we created previously:
In the example above we have rendered just a single Button component.
Let’s create an array representation of the data in the wireframe, so we can map through and render all the buttons in the ButtonBox:
Check your terminal and make sure your React app is still running. If not, run npm start to start it again.
Open your browser. If you followed along, your current result should look like this: 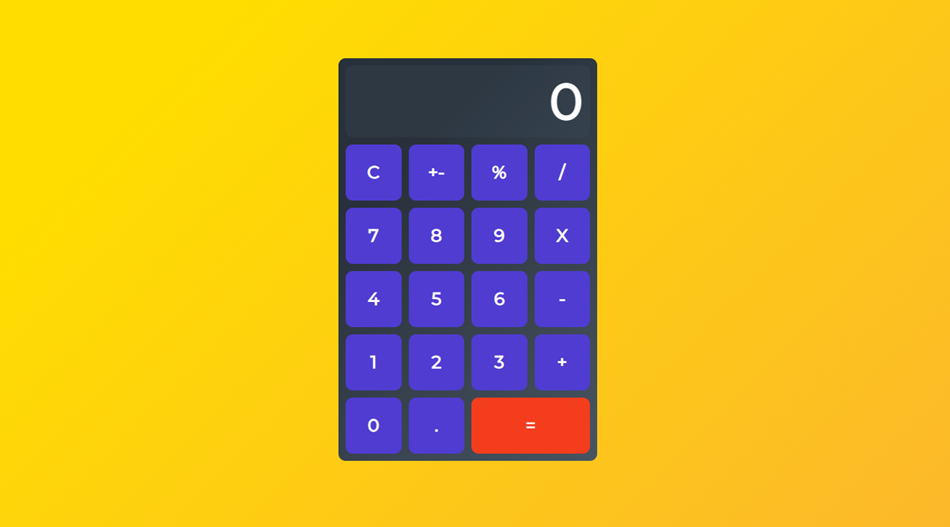 If you want, you can also open the browser’s devtools and test out the log values for each button pressed.

Next, we’ll declare the state variables using React useState hook.
Specifically, there’ll be three states: num, the entered value; sign, the selected sign: and res, the calculated value.
In order to use the useState hook, we must first import it in App.js:
In the App function, we’ll use an object to set all states at once:
Our app looks nice, but there’s no functionality. Currently, it can only output button values into the browser console. Let’s fix that!
We’ll start with the Screen component. Set the following conditional logic to value prop, so it displays the entered number (if the number is typed in), or the calculated result (if the equals button is pressed).
For that, we’ll use the built-in JS ternary operator, which is basically a shortcut for the if statement, taking in an expression and returning a value after ? if the expression is true, or after : if the expression’s false:
Now let’s edit the Button component so it can detect different button types and execute the assigned function once the specific button is pressed. Use the code below:
Now we’re ready to create all the necessary functions.
The numClickHandler function gets triggered only if any of the number buttons (0–9) are pressed. Then it gets the value of the Button and adds that to the current num value.
It will also make sure that:
The commaClickHandler function gets fired only if the decimal point (.) is pressed. It adds the decimal point to the current num value, making it a decimal number.
It will also make sure that no multiple decimal points are possible.
Note: I’ve called the handling function “commaClickHandler” because, in many parts of the world, integers and decimals are separated by a comma and not a decimal point.
The signClickHandler function gets fired when the user press either +, –, * or /. The particular value is then set as a current sign value in the calc object.
It will also make sure that there’s no effect on repeated calls:
The equalsClickHandler function calculates the result when the equals button (=) is pressed. The calculation is based on the current num and res value, as well as the sign selected (see the math function).
The returned value is then set as the new res for the further calculations.
It will also make sure that:
The invertClickHandler function first checks if there’s any entered value (num) or calculated value (res) and then inverts them by multiplying with -1:
The percentClickHandler function checks if there’s any entered value (num) or calculated value (res) and then calculates the percentage using the built-in Math.pow function, which returns the base to the exponent power:
The resetClickHandler function defaults all the initial values of calc, returning the calc state as it was when the Calculator app was first rendered:
One last thing to complete the feature list in the intro would be to implement value formatting. For that, we could use a modified Regex string posted by Emissary:
Essentially what it does is take a number, format it into the string format and create the space separators for the thousand mark.
If we reverse the process and want to process the string of numbers, first we need to remove the spaces, so we can later convert it to number. For that, you can use this function:
Here’s the code where you should include both functions:
Check out the next section with full code on how to add toLocaleString and removeSpaces to the handler functions for the Button component.
If you’ve followed along, the whole App.js code should look like this:
Congratulations! You’ve created a fully functional and styled app. Hopefully you’ve learned a thing or two during the process!

Some further ideas for you to explore would be to add some scientific features, or to implement the memory with the list of previous calculations.
If you have any issue reports or feature requests, feel free to leave them in the GitHub repo. If you like the project, feel free to star it.
Madars Biss (also known as Madza) is a passionate software developer and content creator for SitePoint.
Learn the basics of programming with the web’s most popular language – JavaScript
A practical guide to leading radical innovation and growth.
© 2000 – 2022 SitePoint Pty. Ltd.
This site is protected by reCAPTCHA and the Google Privacy Policy and Terms of Service apply.